Posted on January 4, 2015 by msmarguerite

Listicles are the big thing in mass-market online journalism at this point, so I’ll jump on the bandwagon!

Yesterday I went to a swing dance event, for the first time in a while. Several of my friends who dance are also language learning lovers. It got me to thinking about how social dance — ballroom, Latin, swing — is like language learning. I wrote this at 2 a.m. so I hope it is coherent. 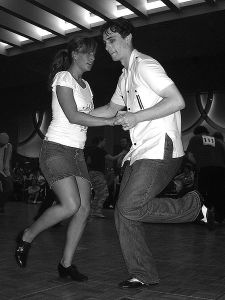 1) The second and third ones you learn are almost always easier than the first.

2) Each one has a certain social and cultural baggage that ought to be learned along with it.

3) Practicing at home in front of a mirror will only get you so far. Both dancing and languages are social skills that, if you’re going to take the trouble to learn them, should be practiced with real people as often as possible.

4) Once you get beyond the very basics, you’ll learn much more in a real-world setting than in a classroom with an instructor.

8) If you don’t share a common language with your partner but you speak a similar language, you can follow what’s going on enough to understand and make it worthwhile, provided the partner is patient (A lindy hopper and a jiver. A Spanish speaker and an Italian speaker.)

9) Both language and dance are inherently unpredictable in the real world; in real life not everything is done exactly as it is in the classroom.

10) There is no such thing as ‘perfect.’ But practice makes proficiency. Lots and lots and lots of practice.

Do you speak English, Spanish, salsa, a bit of Italian and a few words of rockabilly jive? I’d love to get your input on this!